IBM, after inventing a microscope to do so, now has the ability to move atoms around on a surface. What do they do next? They make “the world’s smallest movie” of course!

The ability to move single atoms, one of the smallest particles of any element in the universe, is crucial to IBM’s research in the field of atomic-scale memory. In 2012, IBM scientists announced the creation of the world’s smallest magnetic memory bit, made of just 12 atoms. This breakthrough could transform computing by providing the world with devices that have access to unprecedented levels of data storage. But even nanophysicists need to have a little fun. In that spirit, the scientists moved atoms by using their scanning tunneling microscope to make … a movie, which has been verified by Guinness World Records™ as The World’s Smallest Stop-Motion Film.

Check out Atom playing with his atom. 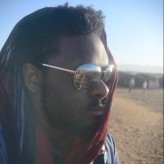 designer/developer who dabbles in the dark arts of photography.

Artist Lisa Park uses an EEG sensor and computer processing systems to translate her thoughts into sound. The vibrations of the music send the water rippling and jumping according to the state of her mind, while the artist sits in the middle of the five pools, seemingly motionless.

The new “Hybrid Air” system by Peugot will reduce CO2 emissions and save consumers money by utilizing a dual gasoline and compressed air engine.

A research group at Japan’s Institute of Advanced Media Arts and Sciences has created a working camera prototype called the Ubi-Camera that uses your fingers and face to take photographs.